For single track junkies the ICME is your dream race. Short, fast, technical stages with lots of flowing track and short sharp pinch climbs to sap your energy. The 2014 ICME consisted of 7 stages over 5 days in Australia’s “red centre”. It was a very well organised event where the organisers had thought of everything with a real mix up of short stages, night racing, time trial, a long stage and a hill climb. Right from the start the Rapid Ascent team were on the ball with spot prizes during the briefings and presentations, social media prizes for the best pictures on Facebook, Twitter, and Instagram, drinks vouchers under your seat whilst attending presentations, and well thought out stage starts and finishes that meant you were never more than 15 minutes ride from the hotels. Staying in a hotel every night during a stage race may seem a bit over the top, but having done other stage races where you sleep in tents and move camp most days made this race so much more enjoyable. I found the breakfast buffet was a struggle, on one hand I really wanted to make full use of the bacon, eggs, hash browns and beans but the sensible side took over so I settled for muesli and pancakes. If you have ever raced on a tummy full of cooked breakfast you will understand why I chose the muesli.

Stage 1 – 38km was a 3 race through mostly technical single track, over a hill called Blair’s Stairs (a get-off-and-push hill), and a lap of the local velodrome to finish off. 164 riders started the stage, 144 finished. Broken collarbones, dislocated shoulders, legs stabbed with poisoned trees (everything in Australia is poisonous) etc saw a lot of carnage in the field. I had a few mechanical issues but when I look back now I’m just thankful I got through without a visit to the hospital. After the stage I called into a local bike shop to pick up a new derailleur hanger, get the full range of gears working again, and repair the headset and chain catcher. It was then back to the hotel to recover and prepare for Stage 2.

Cervo Rosso -the best kit on the course.

Stage 2 was a 300m sprint up Anzac Hill at dusk. After getting my bike repaired from the morning’s damage, stuffing in some lunch, recovery drinks, and cooling the muscles in the hotel pool to rid them of lactic acid I changed my wheels and put on a set of road slicks – yes road tyres on a MTB!!. It makes for an odd looking bike but gees she goes like the clappers when you put the hammer down. Riders were set off at 30 sec intervals to climb the hill, most went with knobby MTB tires whilst some of us pretenders went with slicks. As the stage was so short (less than a minute for the top 20 on GC) the time gains weren’t going to be significant, a carnival atmosphere became apparent. Some riders raced in fancy dress, baggy shorts – gasp, and some blokes even wore dresses (with underwear thankfully). I turned up in a fresh set of Cervo Rosso Test Team kit thinking I was The Man but ended up feeling a little out of place! There were spectators with cow bells, whistles, clapping, yelling etc, the atmosphere was electric. In the end it was the knobby tire riders that got the first couple of places. I came in 12th on GC on this stage, my second best result for the race. 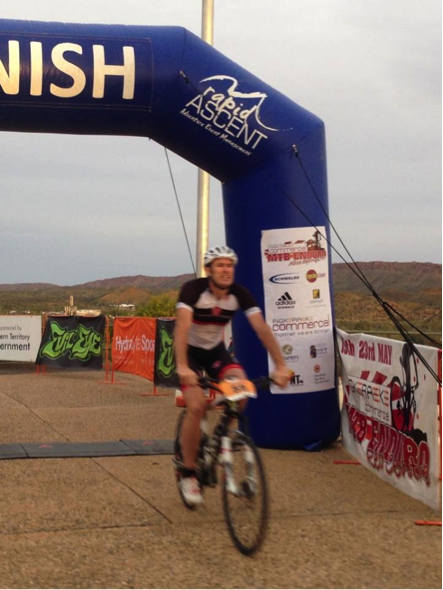 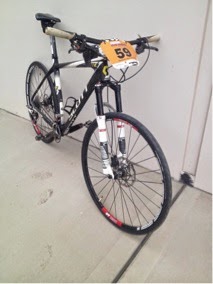 Stage 3 – 51km. The stage was less technical than the first and I managed to work my way through the field after some hiccups in a sandy section near the start. The local MTB clubs and trail builders have done a superb job building the singletrack, one section was even decorated with and old sink and toilet. All went well until I did the first of my 4 x superman impressions of the week going over the handlebars. I recovered well and finished the stage with limbs attached, albeit a little bloody.

Stage 4 – 22km ITT. The ITT and Night Race would cover the same track on day 3. The stage started at the Alice Springs golf club and headed quickly into technical single track. There was plenty of technical stuff with just enough well-spaced double track to allow over taking. I caught and overtook the two guys in front of me after the first few km and then dropped the ball. I had a few more mechanical issues with the bike and lost about 5 minutes on my GC rivals, which I was determined to get back in the night stage. The highlight of the stage for me was my best superman impression of the week right in front of a photographer. After all the effort I put into the flight trajectory and landing he didn’t get a picture of me mid flight! Nevermind, I’m sure there would more opportunities. 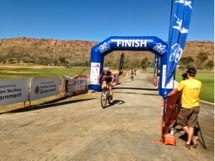 Stage 5 – 22km Night Race – what a doozy. This was my first ever night race; sitting on the start line I was sh!tt!ng my pants. A mass start, lots of dust, sand and people getting lost wasn't all what I expected. The lead guy on GC fell off in the sand right next to me after the first few kms, caught the lead group again and then took a wrong and lost heaps of time. I got a puncture about two thirds of the way through, smacked in a tube, and all pumped up, stormed past several small groups. I thought all was going well when I got past the point at which I fell off in the morning stage and thought yes I’m home…..but the celebration was too early, 50m further on down the track I did superman impression #2 over the bars for the day – and there was no one there with a camera. I limped home in 32nd place a little sore and dejected but thankful that the ambulance wasn't required and my bike was still in one piece. 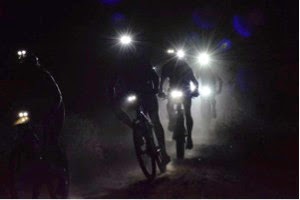 Night racing is fun, fast and terrifying all at once

Stage 6 – 81km. If there was to be any stage in my favour this was it. Having spent the last 7 months training solely on the road bike my single track skills left something to be desired. This stage had 45km of concrete and bitumen, I could hear the MTB purists dreading “the queen stage”, and secretly I couldn’t wait. The stage started with 25km or so of single and 4WD track. Early on a tree jumped out and grabbed the end of my handle bars and superman impression #4 for the week was completed. The Simpsons Gap Bike Path was 17km of beautifully laid twisty concrete. The first drinks stop was at the end of the dirt and start of the bike path. There were two other guys close to me on GC so I wanted to get some time on them. By the time everyone got their drinks onboard we had a group of about 12. I got on the front, put the hammer down and immediately blew 3 riders off and a 4th got a puncture. Unfortunately I also blew Imogen Smith off the back, I felt pretty bad as she had helped me get back onto the group after my superman impression. At one point I managed to split the remaining group of 8 but they managed to get back on again. After all the attacks we decided at the end of the bike path to be friends again and tackle the 30km of bitumen road as a group. We picked up a couple of loners riding the road by themselves and got to the last bit of dirt before the home run. The track over the ranges was very steep, so steep that we had to get off and push. Descending the other side was awesome, negotiating boulders the size basketballs and the photographers 4WD which had taken the A line. A final flat piece of double track, a lap around the local BMX track and I was home in 11th place overall. My best result of the race.

Day 4 was “wear your ICME jersey” day, those with big sponsorships did the right thing by their sponsors.

Stage 7 – 46km. The final stage was one of my favourites. The local MTB club riders not competing in the stage race were able to ride this last stage. The stage covered some of the tracks we went over earlier in the week – but in the reverse direction. The local guys that raced turned out to be a sensation. I was overtaken at about the half way mark by three of these guys; one was wearing sand shoes! I was embarrassed at first, I mean here I am with a flash bike, CR kit, Supplest shoes, and looking like a real poser when this local guy wizzes past wearing baggy shorts, sandshoes and a t-shirt.! These guys knew the tracks like the back of their hand and they showed no mercy. I was lucky enough to catch the back wheel of the third guy and followed him. His bike handling skills were amazing. I was just able to keep with him on the single track but when it came to the open stuff he would slow up. We took turns, I towed him on the open track and when we got to the single track I would give him a flick of the elbow and a quick “do your stuff mate” comment. We caught and overtook the other locals and rolled across the line in 16th place. Afterwards I caught up with the young guy that helped me out – turns out he is only 14!!. 114 riders were left once stage 7 finished, the attrition rate shows just how tough the race was on bodies and equipment. 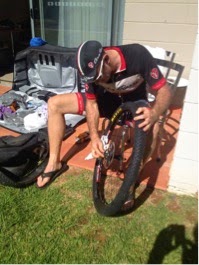 All in all the ICME was a great event, I had so much fun that I didn’t want it to end. The one little comfort that made the end of racing feel ok was the knowledge that I was going to blitz the breakfast buffet in the morning. The camaraderie amongst the riders was awesome. If you got a puncture or had a mechanical everyone passing would ask if you were ok or needed help. The Rapid Ascent team and volunteers did a fantastic job as did the local MTB club, support organisations and bike shops. Overall I finished 5th in my category and 17th in the General Classification. Besides the mechanical issues I had I loved every minute of it – even the superman impressions. To come away relatively unscathed I think was a miracle – or I just wasn’t going hard enough!
Posted by Flat-Out-Forty at 05:36

About Flat Out Forty

Flat-Out-Forty
I'm Steve Bunton, an Elite - Veteran mountain biker competing with the Cervo Rosso Test Team. I starting racing BMX when I was 4 years old, moved on to rowing, rugby and waterpolo at high school and continued with rowing until my late 20s. In my 30s I took up road cycling and by the time my late 30s rolled around I had transitioned to mountain biking. I'm now in my 40s and going "flat out". In my Flat Out Forty year I did one of the hardest MTB races in the world, the longest road race in WA, the longest MTB race in WA, the longest and hardest 1 day road cycling sportif in Australia, the longest and hardest road cycling sportif in WA, and hosted a charity rowing event raising money for the Baraka Community Partnerships. My goal is to remain competitive in elite mountain biking well into my 40s and participate in as many charity fundraising events as I can.